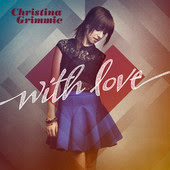 Perhaps the most famous YouTube cover star of them all, Christina Grimmie's second full length, With Love, made its full debut. Her debut album, Find Me, garnered mixed to positive reviews and a No.6 position on Billboard's Independent Albums and No.35 overall. How will this album fair reception wise on Critic of Music? Read on to find out.


Over Overthinking You: It starts off a little bit too hectic, she's trying to put some Black Keys into teen power pop, with mixed results. The chorus fairs better thankfully, having a decent hook and better production. Then, when the track seems to be heading in the right direction, the bridge tries to blend in reggae. Overall, its a shame the chorus is let down by the multiple genre disorder spattered across the rest of the track. Bruno Mars might not be too happy about the Locked Out of Heaven rip off either. C+

Absolutely Final Goodbye: The title alone seems to leave little to be desired; it comes off as immature before the music even starts to play. As the lyrics roll out, its definitely fairly generic. However, everything about the song is super catchy, from the piano riffs, the "I spelled it out for you" post chorus, and scathing vocals which make the lyrics forgivable. Super fun, super catchy. A

Make It Work: Sara Bareilles? Did you stick Brave on this poor girls album? You didn't? Well you had me fooled. It's a bit slower and laid back than the aforementioned Brave, buts its still enjoyable. Good, not great (but that note at the end is pretty great). B-

Get Yourself Together: The 60's have returned on a Teen Pop album of all places. That being said, Christina definitely pulls this off very well. Somewhere in England, Duffy feels a disturbance in the force. A

With Love: Finally, Christina is back where she belongs: the piano! While the piano part is beautiful (along with the rest of the song), the genuine interests of Grimmie feel drowned out by the obligatory cellos and Christina Aguilera riffs. A restrained rendition of this song would probably work better. All that being said, no Disney or Nick starlet of similar age would be able to pull this kind of ballad off as well as she does. B+

Tell My Mama: Pop culture references galore (IE I Knew You Were Trouble, Saved By The Bell) and more 60's influences can be found here. If anyone plans to make a vocal range video for this album, there are harmonized vocals all over this bad boy. It's catchy, sure, but the lyrics still feel very basic. B

Feelin' Good: Quivering organ chords fill the background of yet another 60's track. However, this one isn't nearly as charming as its predecessors. Whether its the formula running old, or the track itself being worn out, it doesn't feel like anything but an album filler. C-

The One I Crave: Im running out of different ways to say that there's a 60's influence. My brain is going numb, I'm genuinely sick of these tracks now. Differentiate Christina! D+

I Bet You Don't Curse God: Finally, a ballad. It was desperately needed. Rather than being yet another High School love song, Christina really connects here, saying: "I bet you don't curse God when you're child is gone and he ain't picking up the phone." Definetly a heavier song than the rest of discography in total, it will be interesting how her diverse fan base will react to her most blatant Christian song yet. A great Christian song and a good Pop one as well. A-

Think of You: Sorrowful cellos move into more optimistic string plucks very quickly. Christina shows a much deeper sense of maturity here, The Civil Wars and The Nocturnals would have no problems sticking a cover of this on their next album. If only we could've found this maturity and sophistication on the rest of the album. A+

As a whole, Christina had some goods, and some bads with this album. The missteps include putting 4 songs back to back that sound the exact same, not using her notorious piano enough, and putting the best tracks at the back and forefront, making the middle half nearly unbearable. However, there were its fair share of good steps, with some super catchy pop songs, and gorgeous acoustic tracks, Christina showed a bit of versatility and maturity. For the next album, drop the 60's, its not you Christina. Keep the great pop songs for your fanbase, and add more acoustic tracks for your fanbase, and for some further appeal. Overall, a massive improvement from Find Me, but there is still work to be done.


Vocals: B+
Lyrics: C-
Instrumentation / Production: B+
Overall: B-