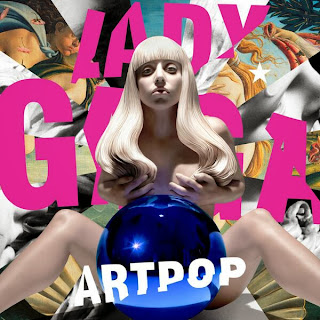 The day has arrived, ARTPOP has leaked in its entirety, slightly more than a week before its worldwide release. The expectations for Gaga are running high, all eyes will be on her first week sales (I.E. "WILL IT SELL AS MUCH AS BORN THIS WAY?") or "Will she get better reviews than Born This Way?" How does she fare? Lets take a look.

Aura: The initial demo seemed promising, especially considering it was a demo. But this was more of a backtrack from the demo unfortunately; she took out her vigorous growls and let a lethargic vocal replace it. Aura is a disaster, a calling it a hot mess would be putting it lightly. But at least Gaga's knowledge of how to make a fantastic hook is still there. ARTPOP has started out on the wrong foot. D+

Venus: Another mess. Choppy lyrics, jutting from side to side. What is the point you are trying to make here Gaga? "Aphrodite lady sea shell bikini / Garden panty / Venus." What? Again, the chorus saves it from being a true hot mess, but it is still concerning.  C

G.U.Y.: It starts off with a fairly creepy, sensual voice and drone, but ARTPOP has finally entered the right lane. Zedd's production is gritty, 64-bit based, but pulses with rave like energy. The beats are so accented you can perfectly picture a dance routine in your head. That chorus is some of Gaga's best work, a massive contrast from the first two songs. A+

Sexxx Dreams: Another sex based song, but oddly enough, this seems to be where Gaga works the best. The vocal effects are definitely present, but this adds to the idea of Gaga tossing and turning in her bed having these… dreams. I am a bit disappointed by the chorus, it sounded much more radio ready at iTunes Festival. Does that mean its not good? No. It's still better than what any of Gaga's contemporaries could muster. The bridge even gives a nod to Poker Face with its "why am I in bed with you when I'm thinking of you" style-lyricism. A

Jewels n' Drugs (Feat. T.I., Too Short, and Twista): This track was horrifically misplaced. Sure, it has its "pop" elements, but it is pushing the limit of pop a little too far. Gaga may claim that this redefines "pop," but this just illustrates the line that pop shouldn't cross. C

MANiCURE: The rock Gaga from 2007 has returned. It feels a bit like an album filler, but the fact that it distances itself from the rest of its pop brethren with its rock influence does save MANiCURE from being completely obsolete. Similar complaint from Sexxx Dreams, at iTunes Festival it was far more of a genre switch, something that was far more interesting B-

Do What U Want (Feat. R.Kelly): These two nailed it. Who would've though R&B, EDM and Pop could blend together so effortlessly? Sexy, unearthly, euphoric, everything that has the makings of a great (and hit) song. A+


ARTPOP: Far less in-your-face than the rest of the album, its a welcome change in mood. The production riff sounds a bit alien in nature, but this idea seems like a theme throughout the album (Gaga's obsession with other-worldly figures runs rampant on tracks like Venus and G.U.Y.). The lyrics show a lot more thought and consideration than anything thus far. A-

Swine: If you danced when you heard Applause or G.U.Y., put yourself in a strait jacket right now. Well, at least for the chorus, Swine loses a lot of its drive during the verses. The chorus and drop are pretty amazing, and the "SWI-I-I-I-I-I-I-NE" hook is textbook worthy, but the 2nd verse lacks the bass fill that we receive in other parts of the song. B+

Donatella: Gaga doesn't feel like she's trying too hard in this song, maybe it's because she's portraying someone who's blonde and "a bit of a bitch." Sadly, this more genuinely fun Gaga concedes to an electronic production. It feels a bit cookie-cutter during some sections, then at other points you can hear some true potential. The breakdowns should've been traded out for some great hooks; so much potential that is never fully achieved. B-

Fashion!: The second song in her discography entitled Fashion, separated from its predecessor by a simple exclamation point. Thankfully, the electro-rave synths are exchanged for some smooth jazz piano mixed with pop guitars. Fashion! is just as fun as the aforementioned Fashion, if not a little more. It's a standout simply for its lack of trying too hard. Not a fan of her weird vocal placement on this track however. A-

Mary Jane Holland: And the rave has returned. It would actually be bearable if the tempo and time signature weren't so odd and… draggy. At this point, the gritty production jobs are no longer edgy or cool, they're just irritating. C+

Dope: For those of you who wondered where I Wanna Be With You ran off too after iTunes Festival, it's here, incognito. The line "I need you more than dope," sounds a bit silly, but Gaga of course doesn't sound like she believes that. It was more genuine and effective as I Wanna Be With You, now Gaga sounds like she's thinking too hard about how to make a great record. C+

Gypsy: Why did Gaga put two ballads at the end of this rage-tastic album? Yes, Gypsy is a ballad, it just happens to have a massive chorus with synths. Gypsy seems like one of the few tracks on ARTPOP that carries some single potential, its more pop than electronic (god bless), and is just genuinely amusing. Where was this Gaga hiding throughout the track list? A+

Applause: 3 months later, Applause is still just as charming, epic, and fantastic as before. This should've been the farthest venture that Gaga took into the electronic world. Applause brings the house down, and ends an...interesting album. A+


ARTPOP doesn't feel manufactured, at least on the part of Interscope Records. Gaga sounds like she's trying too hard to impress, by letting this electronic identity take over, we lost the most charming and genuine Gaga there is: the pop Gaga. That is the Lady Gaga that swept everyone off their feet with Just Dance, Poker Face and Bad Romance. ARTPOP has its moments when it's not too "look at me! I'm doing something different!" and these are the most enjoyable. But maybe having Gaga so aware of her public perception isn't that good of a thing after all.

Vocals: B
Production: A
Lyrics: C-
Overall: B-