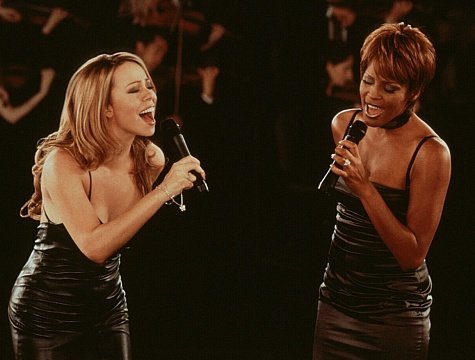 Let the ultimate stan war continue. The two pinnacles of vocal prowess have been causing heads to roll since the 90's, but still the question remains: Who is the best singer?


Melismas: Tie
The technique that every singer uses when they want to impress, and these two women were MASTERS at it. It's not even worth trying to decide a victor in this category cause they're both essentially perfect at it.

Power: Whitney
Both of these legends have been known to belt it out, but a single belt by Whitney has stood the test of time, and has remained in pop culture for 19 years: Her infamous AND IIIIIIIIEEIIIIIIII belt in her 1994 classic I Will Always Love You. Sorry Songbird Supreme, but this one goes to Whitney.

Range: Mariah
Does this even need elaboration?

Musicality: Mariah
Whitney has great musicality and phrasing, but Mariah has a decent lead on her. They can both rip your heart to shreds, but Mariah's knowledge of music theory definitely plays a role here.

Tone: Whitney
Tone is a much more objective category, but in reality, this was Whitney's cherry on top. Rich, thick, velvety tone that blanketed the voice from bottom to top. Mariah's however is much airier and wispier, which is why most people tend to lean towards Whitney in terms of "The Voice."

Chart Success: Mariah
Both of these women have etched their names permanently into the history of Billboard, but Mariah takes the cake here. 24 Top 10 hits, 18 of them topping the chart, the longest running No.1 in history, 6 No.1 albums, with two of them going Diamond. But don't knock Whitney either, she holds the record for most consecutive No.1's in a row (7), 11 total No.1's, and some of the best selling records in history.

Versus:
There are plenty of videos comparing these goddesses. Check them out to make your final opinion.

Overall, while one would rather listen to Whitney because of her tone rather than Mariah's, Mariah still wins the battle. She has the technique to do all and more than what Whitney could do, but Whitney's thicker tone, and more forceful belts are why she has been regarded as "The Voice." An argument for each is a valid argument, because these two are what every singer aspires too.